Mark Zuckerberg in “Hour of Code” during the CS Education Week

So this week (9.-15. december) Has been announced by Code.org as Computer Science Education Week. A lot of  CS all-stars such as Bill Gates and Mark Zuckerberg, and a bunch of other random celebrities  – among these, some guy called Obama! – starred in small instruction videos teaching kids to code through visual programming languages, in a small tutorial called Hour of Code.

After completing the 20 levels of the tutorial, you will be familiar with  basic commands such as forward, turn left/right, repeat, repeat until-statements, if-statements and if-else-statements. All very fundamental and essential coding functions.

Blockly tutorial #15 in “Hour of Code”

The visual programming language Blockly (more about Blockly and other Visual Programming Languages here) looks a lot like the world-famous Scratch. Blockly is hosted by Google, browser-based  and more open and “hackable”. It already contains a mod for robot AI and a “build your own Mario-game”. In the “Hour of Code” mod, the theme is based on famous apps from Zynga and Rovio such as Plants vs. Zombies and Angry Birds. I believe this is to make it more appealing to youngsters.

During each level, you can see your visual programming code converted into real code – here it is JavaScript. A funny comparison that could serve as a motivation telling the coder, that 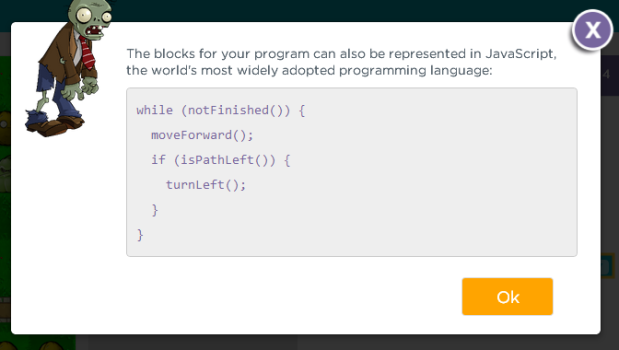 The visual code in Blockly “Hour of Code” tutorial as it would look in JavaScript.

After completing the 20 levels of the Hour of Code tutorial,  luckily it doesn’t stop there. You are then invited into many more hours of coding-fun, gradually increasing in complexity. Code.org states, that after 20 Hours of Code you will have enough coding skills to code your own desired software.

So far, more than 9 million students have completed Hour of Code. The leaderboard shows that more girls than boys! When it comes to countries, surprisingly my own country (Denmark) isn’t even at the top 40! A small country like Estonia is #9, maybe this is why.

These CS Education Week and Hour of Code initiatives are extremely important, if we want to do something about the programming skills of kids. Hopefully, kids will keep programming when the media attention has passed.

Personally, im in the process of establishing an it-creative coding club in Copenhagen, Denmark. Ill tell you more about that later ;-)